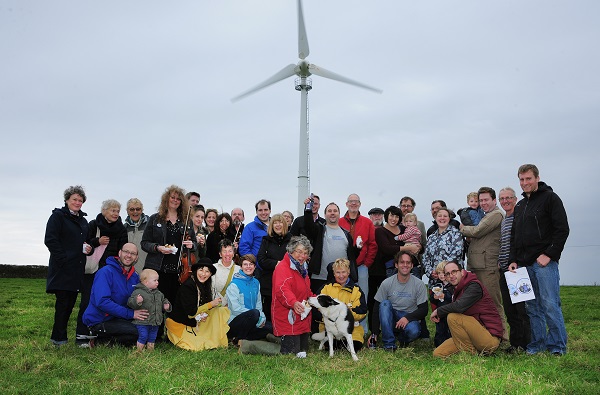 When the government chose to freeze out cheap and clean onshore wind power from the future of the UK’s energy system, it launched a two pronged attack.

One was the removal of the financial support it deserves in order to compete fairly with other energy sources, like fossil fuel generators, which still receive public subsidy. We’ve done a lot of talking about that since we launched Blown Away in October.

But we’ve talked less about the other one: new planning barriers.

Soon after winning a majority in the 2015 general election, the then-secretary of state for communities and local government, Greg Clark, signed a written ministerial statement. The statement added two conditions for successful onshore wind project applications in England and Wales (Scotland has a separate planning system):

What does this mean, in plain English?

Firstly, that you can’t make an application for an onshore wind project unless the site has already been identified for wind energy development in the local plan (developed by the council), or a neighbourhood plan (developed by neighbourhood groups). This might sound reasonable, but it effectively gives any local council a veto over wind power before anyone has even had a chance to engage local communities and put in an application. That includes community energy groups who want to develop wind projects too!

Even if a council wants to support wind, identifying which sites are appropriate for turbines in meaningful detail is expensive. That’s why the cost is normally borne by developers; councils may just not have the resources to do so.

Worse, local plans take years to develop, and once they’re in place they don’t come up for review for a long time - you can’t just start afresh to get onshore wind in!

Neighbourhood plans rely on the voluntary time of locals to produce - and must include all elements of local planning (like housing), which is a big ask. So this is no quick fix either.

The upshot of this is an immediate brake on new onshore wind planning applications in England and Wales.

The new regulations mean that councils can simply ignore onshore wind if they feel like it, never giving it a chance to be considered.

The second condition is much harder to explain. The requirement to ‘fully address… planning impacts identified’ is arguably already covered by the requirement for all applications to complete an environmental impact assessment and conduct local consultations. What's new is the last bit - the idea that the ‘proposal has their [local communities’] backing’.

Sounds reasonable, right? But this is an unprecedented condition for a planning application: how do you prove it? Immediate questions arise: what counts as ‘backing’? Is a single objection sufficient to block any application? Does this amount to a planning veto from small minorities even if there is broad local support?

The truth is that no-one really knows. And that’s the point.

As long as there is uncertainty about whether a project will be struck down at the last moment, the risk of devoting resources to new applications remains too high for a developer to take. And that means curtailing applications before they’ve even begun: because the process is too hard to begin with.

The upshot of this is the almost total withering of the onshore wind planning pipeline in England and Wales.

Together, these rules are a cleverly disguised ban on new onshore wind by another name. So it’s crucial that we challenge them.

This ambitious project has been years in the making, and would construct 11 new turbines - 75% community owned. That’s enough to power 30% of the new homes planned for Cornwall by 2030 with clean energy. It would also invest £30m in one of the poorest areas of the country - that’s not to be sniffed at.

This is just the kind of distribution of benefits renewable energy can achieve if it's done right. And our planning system should be supporting projects like this.

But the final decision rests with secretary of state Sajid Javid, and he could use the second planning condition to stop this in its tracks. This is despite government claims that the new planning rules ‘give local people the final say’ on onshore wind applications

Community Power Cornwall have asked us to stand with them. You can email Sajid Javid and remind him that this project has real local support, will deliver real local benefits and that community ownership of renewables is a material planning consideration that can’t be ignored.