Being of historic or cultural importance doesn’t need to be a barrier to refitting a building, as we’ve seen with Number 10 Downing Street. Here’s another example – the iconic Eiffel Tower. It was built in 1889 as the grand entrance to the Paris World Fair, held to mark the centenary of the French Revolution. It was the tallest building in the world when it opened.

Originally it was to stand for 20 years and then be taken down, but of course that never happened. It was too useful for communications, too popular as a symbol of cultural achievement and national pride. Today it claims to be the most visited paid attraction in the world, and a quarter of a billion people have been to the top.

The tower has seen a number of changes over the years, including various configurations of lifts, different cafes and shops. Perhaps understandably, there is no longer a Russian restaurant on the first deck. Gustave Eiffel’s personal office at the top is now open to the public, and its private spiral staircase is gone. So are the Citroen lights that once made it the biggest advertising hoarding on the planet.

The Eiffel Tower has evolved over time, and it is in the middle of a refit that will bring it’s environmental credentials into the 21st century. The whole first floor has been redesigned, and changes include LED lights, and a solar system on the roof that will provide much of the hot water for the restaurants and bathrooms. 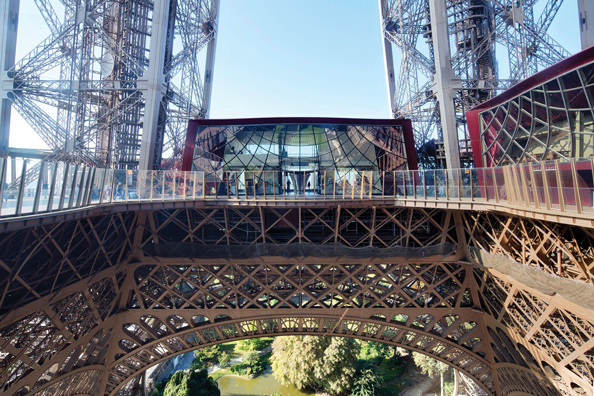 When the tower was built, wind resistance was the biggest engineering challenge, and architects have admired its stability in strong winds ever since. This year those winds have been turned to the tower’s advantage. Two vertical axis wind turbines have been fitted above the pavilion, 400 feet up. They’ve been painted to match the ironwork and are invisible from the ground, but should generate a small quantity of electricity to help power commercial activity on the first level. 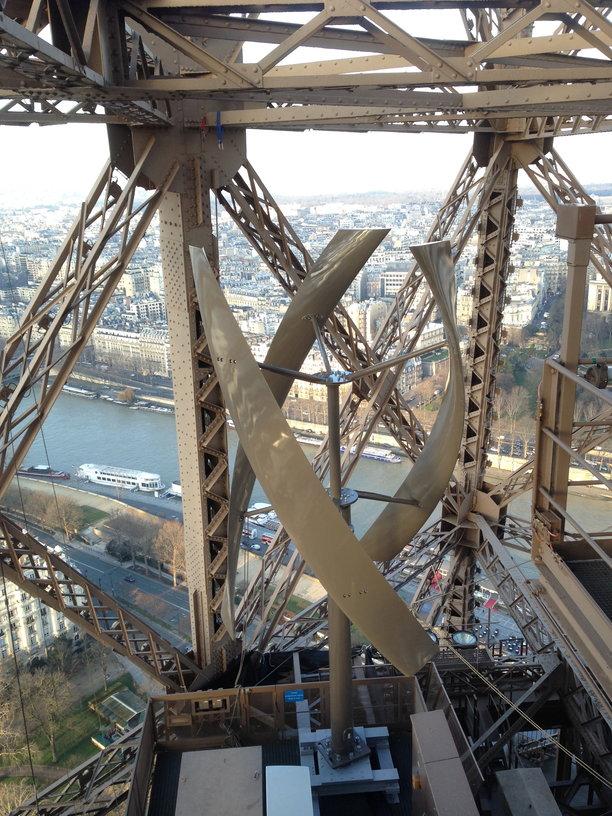 Further energy is generated by water turbines fitted within the water distribution system, a ‘mini power plant’ that created 4,000 kw a year. Rainwater is also captured and stored under the pavilion, and used for flushing toilets.

Visitors will never notice some of the little environmental touches. By inclining the glass ever so slightly in the pavilion, solar heat gain has been reduced by 25%, saving on air conditioning in the summer. Heat pumps maintain a steady temperature all year round.

The tower’s biggest energy drain is at night, when 20,000 twinkling bulbs light up on the hour. The obvious way to save energy there was implemented in 2008, when they moved from a 10 minute to a 5 minute show.

This article was originally published by