March 17, 2015
Daniel Jones
Why a submerged island is the perfect spot for the world’s biggest wind farm

Planning permission has been given for what could become the world’s largest offshore wind farm on the Dogger Bank, off England’s east coast. If fully constructed the project will have up to 400 turbines with a total generation capacity of 2.4 GW. That’s enough to power 1.9 million households – more than Manchester and Birmingham combined.

So why now? And why so big? It seems the UK government is essentially taking a punt on the future of offshore wind. Investment in a more expensive renewable technology at an earlier stage means a premium is being paid in the hope it will kick-start a whole industry. This would in turn reduce costs, while generating low-carbon electricity out of sight. 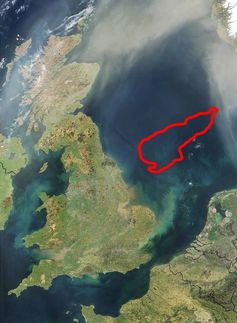 Dogger Bank, located more than 80 miles off the Yorkshire coast, is indeed far out of sight. It seems a good location for a wind farm. The region was an island during much of the last ice age and today it has shallow water, seabed conditions well-suited to the foundations of wind turbines and of course strong, consistent wind.

Its development nevertheless raises a number of technical and logistical challenges, notably linked to the influence of the weather on the maritime supply chain. No wind farm has yet been built that far from land. Furthermore, it still needs to secure contracts for government subsidies.

With fewer neighbours to annoy, offshore wind farms are generally less contested than their onshore equivalents. Offshore wind can have nevertheless a detrimental impact on the natural environment, like disturbance to the seabed by laying cables. But it seems there could be an overall positive effect on marine wildlife as the “artificial reef effect” helps fish group together.

Offshore is costly – for now

Electricity generated by onshore wind can now compete on cost with electricity generated with conventional sources such as gas. But offshore projects from the last licensing “round 3” issued in 2010 are often located in large zones far from the coast such as Dogger Bank, which pushes up costs. 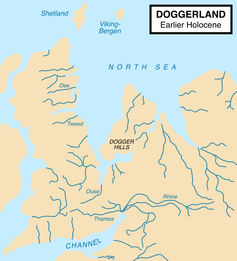 Doggerland 9,000 years ago, before it was cut adrift. Image: Max Naylor. Creative Commons

Nevertheless, prices could easily come down. Indeed, as solar power has recently shown, renewable energy technologies can become dramatically cheaper once they achieve maturity and the technology is scaled up. While long-term projections of future electricity costs are always uncertain, offshore wind could become cheaper through better technology, economies of scale and through optimised designs becoming standardised.

Dogger Bank could be a big part of this – the first of a series of large wind farms which will gain strength in numbers and reduce generating costs.

There are many reasons a country might want to reduce reliance on fossil fuels. Energy generated from oil and gas causes air pollution and environmental degradation, while still requiring subsidies just like renewables. As demonstrated by the late economist Shimon Awerbuch, volatile fossil fuel prices on the international market have a detrimental impact on modern economies. More renewables makes sense to mitigate the impact of future international energy crisis.

High-low range of projected energy costs in 2030, according to the Committee on Climate Change, an independent advisory body. The Renewable Energy Review 2011 / Mott McDonald.

It looks as though offshore wind is now the preferred path for the UK government to meet renewable energy targets. It hopes offshore will provide 8-10% of the UK’s electricity by 2020. Offshore carries a much lower political cost than its onshore equivalent, with wind turbines anywhere near either homes or areas of natural beauty facing very vocal opposition. 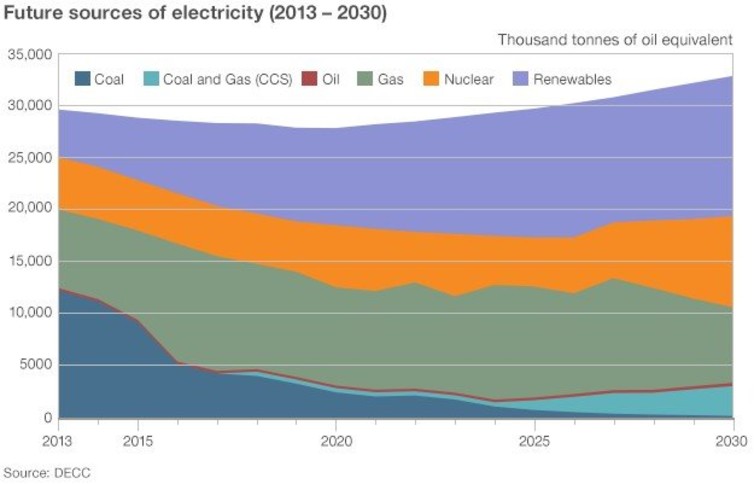 From 2030s, it can be expected that the cost per unit for this technology will be cheaper than for so called “clean” coal or “clean” gas generation while generating far less carbon emissions and pollution.

But, if the UK is to decrease drastically its dependence on fossils fuels and decarbonise its electricity sector, offshore wind cannot be a substitute to the development of other renewable energy sources and to the systematic implementation of large-scale energy savings programmes.

This article was originally posted on The Conversation on 6th March 2015.