December 6, 2017
Esther Griffin
Solar freaking railways could be coming to a station near you!

Back in 2015, we were working with the ‘fracking village’ of Balcombe in Sussex to meet 100% of their electricity needs with a big community solar farm.

But we couldn’t find anywhere on the local electricity grid to plug that much new solar power in. It was too clogged up. Then Repower Balcombe’s technical director, Tom Parker, had an idea. Could we connect solar PV to the electric railway that runs through the village instead?

Repower Balcombe eventually built the solar farm outside a neighbouring village. But we couldn’t shake the feeling that we were onto something. Electrical engineers thought it should be possible in principle to power trains directly with solar, but it hadn’t been done anywhere in the world.

So, we assembled a crack team of experts from Energy Futures Lab at Imperial College London and Community Energy South to work out how to do it.

(That’s traction power - as in the electricity used to make the train move, that comes from solar panels).

At its core, it’s pretty simple. Solar farms would be installed next to the train tracks - on train sheds, nearby fields and industrial buildings. These would not connect to the grid as a usual solar array might. Instead they’d plug into the trackside substations which trains draw their electricity from to power the trains directly.

Our bit of kit works on dc railway (that’s direct current, if your science GCSE serves you!) which is usually third rail. That accounts for about one third of electrified tracks in Britain, over 3000 miles. So the potential is huge.

Trains don’t come all the time (don’t we know it), so the solar system works best with a battery that can store the solar power when the trains aren’t using it. Then when it gets dark, the solar power stored in the battery could still power trains.

We’ve worked out that solar traction power could provide around one tenth of the energy needed to power trains on these dc electrified routes every year. 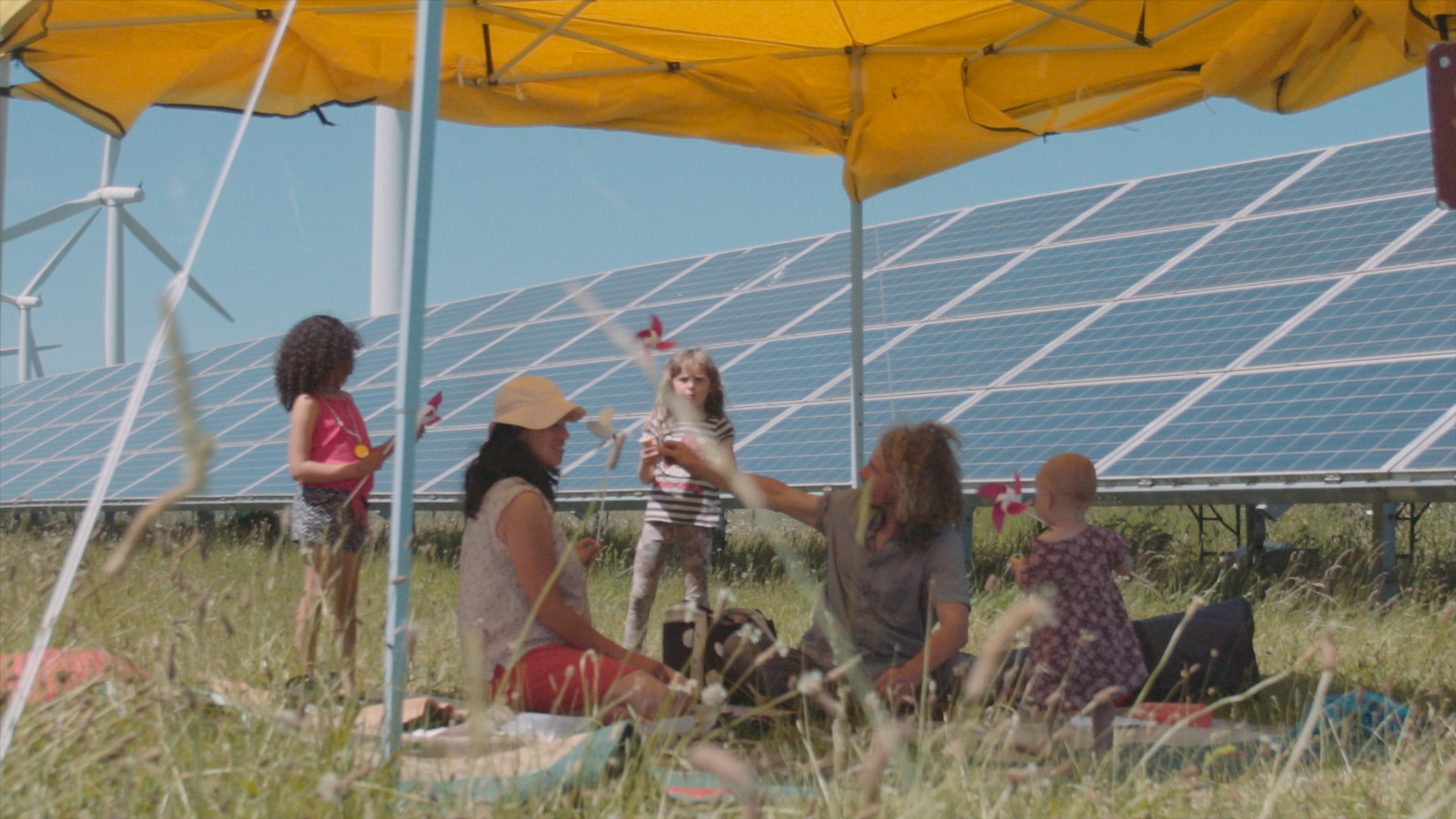 Solar is the nation’s favourite energy source - bar none. There’s something quite romantic - and traditionally British - about the view from a train carriage. Adding solar panels to that picture would get thousands of people thinking about climate solutions in a totally new way.

If the solar farms were community owned, commuters and communities would have the chance to take a direct stake in the low-carbon future.

Since the government cut subsidies for renewables, there have been limited opportunities for ordinary people to invest in solar - or install it themselves. Solar traction power is a great opportunity for community energy groups to get local people involved.

Solar has suffered in recent years from government cuts. One of the reasons we decided to take on this project is because the whole industry has been forced to make solar work in this more hostile environment.

Solar traction power offers a way to make solar work without subsidies. Solar could supply electricity to rail companies at lower costs than they currently pay for electricity from the grid. Connection costs are also low, so from a financial perspective solar railways make sense now, without subsidies. And all the forecasts say it’ll only get cheaper as the costs of solar and storage fall.

Where could this work?

South of London, the Kent, Sussex and what is charmingly called Wessex routes are perfect places to use solar traction power. It’s sunny down there, the trains are super busy and the electricity grid is very congested. During the summer months solar should be able to produce 100% of the electricity the trains need.

Community Energy South’s members have found 400 possible locations for solar farms. If we built half of those, solar could power 15% of the rail network year-round.

As the name suggests the London Underground is mostly underground. But lots of the trains come up for air at the ends of the lines.

There’s much less space to put up large solar arrays in central London, but we’ve found 50 possible locations that could fit the bill, from derelict land to train depot rooftops, station car parks and even floating solar on reservoirs.

They would produce enough electricity to power 6% of the tube, or 50% of the Piccadilly line. That’ll get you from Heathrow all the way to King’s Cross - via Covent Garden, Leicester Square, the British museum and the Science museum...

Liverpool’s commuter rail network has plenty of potential solar sites. As they upgrade the trains and track, demand for power will increase. Our friends at Liverpool and Wirral Community Energy groups found 22 sites where solar could be installed, which could cover around 20% of their electricity demand.

There are also a number of smaller city metros or trams that could be powered by solar panels in the UK. Across the country, trams carry 100m passengers every year. One of the largest - Manchester Metrolink, spends a cool £7m on electricity annually - and there’s lots of potential to install solar on brownfield sites by the tracks.

What about other parts of the world?

The potential for this technology is enormous.

There are 30 city metros around the world with dc tracks where solar could be plugged in, and four national rail networks. Countries in the tropics get a lot more sun than we do, so in those places solar could power the trains 100% all year round, bypassing the need for local grid connections.

In India, solar is expanding at great speed, and the government has one of the most ambitious solar targets in the world. They’ve also got over 15,000 miles of electrified railways, and work is well underway to build more.

Right now, they’re working with the UN Development Programme to install solar on 8500 stations. 90% of the Delhi Metro is powered by solar via a regular grid connection. Clearly, the potential to power the trains directly is huge.

Spain too has lots of electrified railway - 4000 miles of it - and 11 city metros including Barcelona and Madrid. They enjoy 50% more direct sunlight than London, and in Barcelona there’s already an appetite for solar power. All large buildings in the city are required to have solar, and they’re aiming to for 100% renewable energy by 2050. 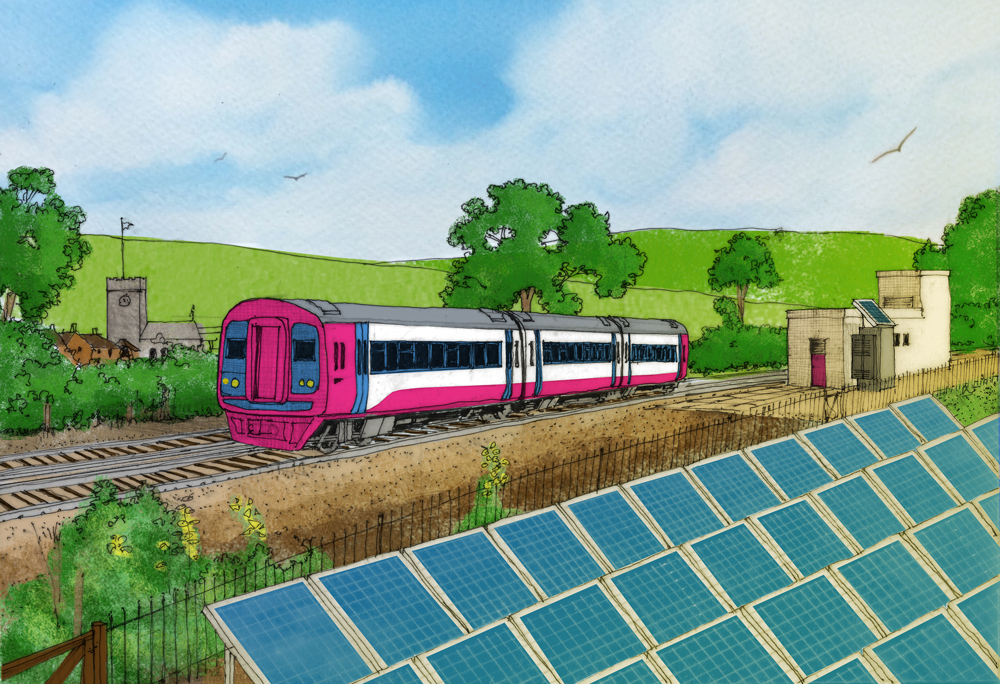 So when will your commute to work be powered by sunshine?

There are still a number of hoops to jump through before we’ll start seeing solar traction power across the UK rail network. There are complexities around getting the tech approved, insurance, contracts and storage which all need to be worked out. But, everything we’ve found shows it is incredibly promising.

There’s also a lot of potential for this technology if the solar panels were installed right next to the track. There’s often a bit of land there which isn’t really used - perfect for panels. Installing and maintaining solar panels right by the tracks is very challenging. It requires a lot of resources to make sure it’s done safely, and that can be expensive. But, working that out would unlock tonnes of extra options for solar powering trains.

Solar traction power is both technically feasible and commercially attractive. It’s a way forward for subsidy free solar in the UK, and gets around the problem of our congested electricity grids which are currently holding back new decentralised renewable energy.

Hundreds of megawatts of new solar power could be plugged into Britain’s railway tracks, with vast potential on electrified railways around the world. New electrified rail routes in the tropics could be rolled out exclusively via solar and storage, with no need for local power grids to keep up.

Our findings show that a first wave of six to ten solar farms could be community owned, and economies of scale would mean the next 100 would be even cheaper - unlocking tens of millions in new investment for solar. And that’s not even accounting for the falling cost of solar and storage.

Train companies along solar-powered routes would enjoy frozen electricity prices for quarter of a century. If solar traction systems were installed at scale, railways south of London could shave 4% off the amount they currently pay to power their trains - even at today’s prices -  and 13% off their carbon emissions.

For passengers, this is a chance to take a personal stake in driving forward the transition to a zero carbon future.

Picture the scene from the window of your daily commute: in winter, a sign appears in an empty field inviting you to invest in a solar farm there. In spring, construction begins, and by summer, your train is carrying you home on a sunbeam.

10:10 is all about finding positive, practical solutions to tackle climate change. We’ve installed solar on schools, campaigned for better policy for renewables and looked for innovative ways for people to make the most of their local energy resources.

We’ve produced a report with more details about our work and findings. Read it online here or download it here.