For the last couple of months, we've been running a petition to get 'local supply rights' for local energy co-ops – giving groups like Repower Balcombe the right to sell power directly to their neighbours. 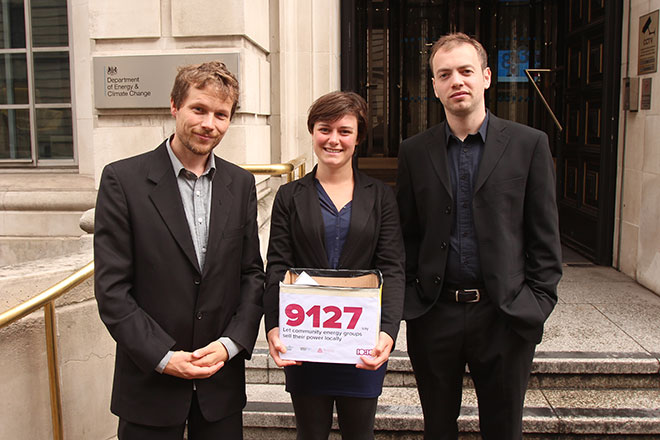 Petitions aren't our usual style, but we couldn't get this issue out of our heads: one little change to the energy market rules that could transform Britain's awesome-but-undersized community energy movement into an enormous benevolent fleece-wearing monster.

If you were keeping an eye on the signature counter over the weekend, you might have spotted that it was well over 11,000 at one point. But when we checked the database, it turned out that some of the keener supporters had signed two, three, or even five times. Thanks guys, but we're only allowed to count you once! So, 9,127 it is. If you're one of them, thank you.

We've asked the climate minister Amber Rudd to formally respond in Autumn, when MPs come back from their holidays and parliament swings back into action. A group of researchers at the university of Leeds have already published a list of things the government could do to make this possible (dense PDF alert!), so we'll be looking out for specifics on how Rudd plans to put them into practice.

But we don't have to sit around in the meantime! There's loads going on in local energy at the moment, and we're working on some new ways to get involved. So keep an eye on your email, Facebook and Twitter feeds for all the latest.