Electric vehicles are only good for nipping to the local shops? Not so, says Neil Lewis in a guest blog for the National Trust.

Living in Carmarthen and working in the Gwendraeth Valley, my job helping small businesses address environmental/energy concerns was taking me all over our beautiful county. The beaches of Carmarthen Bay one minute, the hills above Llandovery the next.

I had insulated my house, installed 3kw of west facing PV panels and shouted at the kids on a daily basis for leaving lights on! (Less so, since installing LEDs). I’d held court in the pub about climate change and environmental concerns for twenty years and was predictably running low on friends!!

The family car was our beloved Galaxy 7-seater with a 1.9 turbo diesel engine. State of the art when we bought it in 2000. We’d run a birdwatching business all over west Wales with it. Gone on family holidays to the Netherlands, Spain and the south of France (three times). It had carried surf boards, dogs and especially mountain bikes. Permanently sandy and smelly! And that’s just the kids.

I’d even slept in it on a weekly basis in sub-zero temperatures whilst working as a private dentist in England (but that’s another blog entirely).

Its old engine had covered 120,000 blissful miles and the puff of black smoke that followed me down the street evoked happy memories.

However the 35 miles per gallon was starting to nag at my conscience. I scanned the internet and newspaper adverts - seemed electric technology was advancing.. I fancied an Ampera - but £30k!

My colleague mentioned that Citroen were leasing the C-zeros for £199 per month. Test drove one in Bristol whilst visiting my daughter at uni. These cars fly!

I tried to order one, all the Zeros, I-ons and Mi-Evs had disappeared. For a week I searched the internet. Manchester, Leeds, Birmingham, perplexed dealers couldn’t understand it.

In my research, I discovered that a dealer in Cornwall had bought them all as a job lot and was selling them at half-price!! The deal was done, my lips-red EV arrived on a flat bed and our family heirloom was driven away in the traditional puff of smoke.

What have I done? Surf boards, Mountain Bikes, dogs … for sale …

There’s a steep hill to Pontyberem (Crwbin), will I be able to even get to work, 20 miles away? 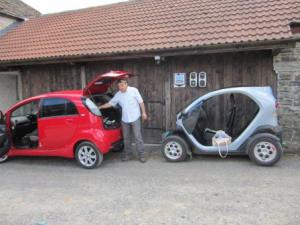 My wife and I drove up to Cwmcerrig Farm Shop on a Sunday morning for breakfast in Cross Hands - half the charge had gone. Will we be able to get home…? What have I done?

Slowly, but surely, I learned. We thrilled at the acceleration, marvelled at the recharging on the downhill sections. Slowly travelled further. Fixated by the range display the whole time, I started getting a neck ache … seriously. Crucially, I learnt (eventually) that the range display is a “Guessometer” - based on how you’d been driving recently.

Where are the charge points? What’s a Zap-map? At first, in January 2013, the only charge point in the area was at Home Farm, Dinefwr Park, Llandeilo. Provided by Zero Carbon World and installed/hosted by The National Trust near to their 50kw solar array. It was comforting to know that I wasn’t alone! Others believed in the technology. I was not alone.

We’d put the kids and the dog in the back and visit Dinefwr, have a coffee and return home with the smug satisfaction of spending our money on fairtrade coffee rather than diesel. The joys of slow travel were a revelation. We’d drive down to National Trust Stackpole, trying to catch sight of the Otters, whilst walking down to Broad Haven beach, stunning. Over the butterfly rich cliffs to the Boat House for coffees. Return via Bosherton, bat spotting, to a fully charged car. Bliss.

St David’s became a regular destination, charging at Caerfai OR TYF. Tresaith and back without a recharge. Confidence building the whole time. Charge points being discovered in Llandovery, Llanwrtyd, Llandrindod, Swansea Transport Museum, Rhosili … all slow chargers, but the coffee!!

The Citroen flying along. We even get up to North Wales via Aberystwyth, CAT and the eco-guest house at Blaenau. Range Anxiety. Pah!

Then the wonder of the rapid chargers at the motorway services. Fully charged in 20 minutes! We holidayed in the Cotswolds. Being an expert on services I can highly recommend the eco-credentials of Gloucester services (North).

We are saving £1000s every year with our low-carbon transport. I love plugging in to my panels on a summer’s evening. My Westies filling the “tank”. It’s good having an “oil-well” in your garden!

However I am spending £100s on coffee.