May 2, 2019
Esther Griffin
Is Mr Whippy sending out toxic air? Our latest research.

Picture the scene: it’s the one decent summer’s day of the year. You’ve headed to the beach, donned your shades and sat back on the pebbles enjoying the sound of waves lapping the shore and seagulls swooping overhead. It only takes the inviting music of an ice cream van to complete the perfect picture.

Ice cream vans are a charming part of our parks, seasides and school gates.

But most ice creams run on diesel engines - left on all day to run the freezer. And that spews out a whole lot of toxic pollution into the air.

Air pollution is responsible for 40,000 early deaths a year in the UK. It’s linked to cancer, lung disease, heart disease, asthma and diabetes.

The two main offenders are nitrogen dioxide and particulate matter (soot), which go deep into the lungs. 40% of air pollution comes from diesel vehicles.

And of course, vehicles also cause climate change. The fuel is made from oil - cars are kind of like mini fossil fuel burners - climate change comes out of the exhaust pipe.

If we could actually see the pollution pouring into the air as kids drag their grandparents to get a flake 99 - suddenly that summer’s day doesn’t look so perfect.

But just how bad are ice cream vans?

We sent twelve 10:10 volunteers on a mission - wear an air pollution monitor for a day, and visit an ice cream van at some point.

The results showed that buying an ice cream exposed the volunteers to the highest levels of particulate pollution for the day of the experiment. So anyone who regularly goes past an ice cream van breathes in that dirty air every time. 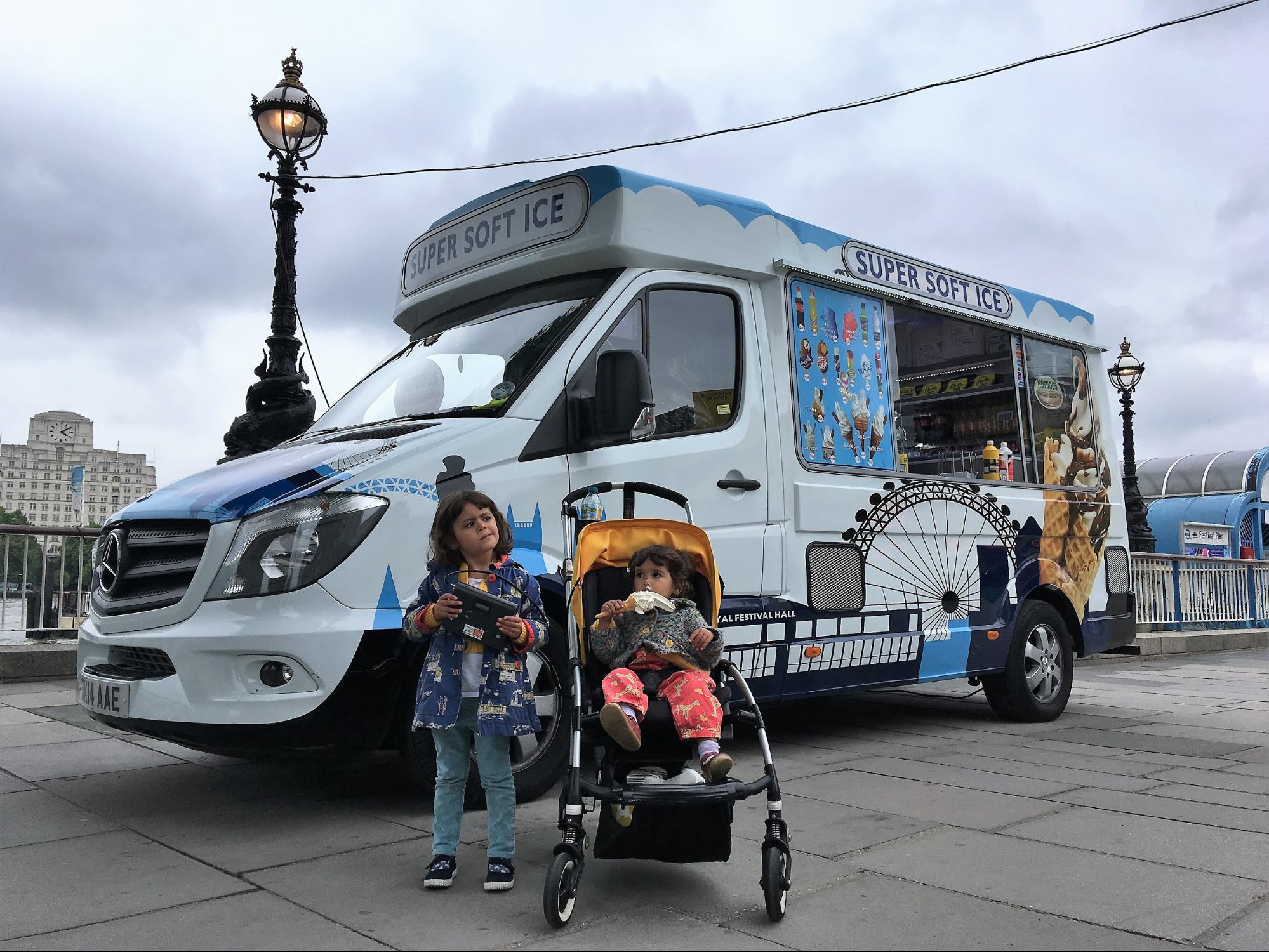 Then, we hired an ice cream van and parked it in a school playground for the day. Our air pollution monitors showed that the highest levels of pollution were inside the van. The friendly person giving you your Twister that’s getting lung fulls of pollution.

Outside the van, the highest levels of pollution were 2-5 metres around it. Levels of dangerous black carbon particulates were 2 to 10 times what scientists consider ‘high’. Children, who breathe lower where the pollution is more concentrated, are more vulnerable.

We have to clean up our air. Politicians around the country are waking up to that and introducing clean air zones where the most polluting vehicles are charged for driving in. It’s a great idea, but it could spell the end of the beloved ice cream van.

How can we solve it?

Some ice cream vans can plug into mains electricity when they’re parked up, so they don’t need to keep the engine on. That cuts air pollution right down, but in most places that’s not possible.

So, we looked at a couple of ways to make ice cream vans cleaner.

Most ice cream vans are a modified version of the Mercedes Sprinter. Mercedes are releasing a fully electric version of the van, the e-Sprinter, this year. So the obvious thing to do would be swap the old vans to these new electric ones.

But most ice cream vans are run by small businesses or individuals. They just haven’t got the money to be buying a brand new van - particularly if they recently got a new diesel one.

What about sticking some batteries on the van - charged up from the mains in the morning, and topped up with some solar panels on the roof?

Sadly, we discovered adding huge extra bits of kit makes this a no go. Batteries are just too heavy, and the fibreglass roof can’t support the extra weight of solar panels.

We also looking into equipment using compressed air tech. These use liquid nitrogen and generate clean electricity while venting very cold air. Large supermarket lorries are already using this tech, but after lots of research we found the system is just too big for a little ice cream van.

So, what are the options?

We need to clean up our air - urgently. Clean air zones need to be enforced to protect our most vulnerable.

But it’d be a shame to let small businesses like ice cream vans take the wrap and go under.

The government should be supporting ice cream van owners operators to upgrade their vehicles to new zero emissions vans.

Local Authorities need to work with them to install plug-in points at popular ice cream spots in their areas. And they should offer grants to convert vans to be able to plug in - it’s not a standard feature.

There’s also work for the ice cream industry - they need to keep working on new ways to cut air pollution from their vans. New vans should all be fully electric and independent businesses need support to upgrade.