June 19, 2015
Malachi Chadwick
I actually went to a solar farm, and it was amazing

It’s painfully early on a drizzly Sunday morning, and I’m off to visit the Five Oaks solar farm in Sussex with our friends from REPOWERBalcombe.

This is big moment for me – my first time seeing a solar farm in real life. I know what I want it to be like: discreet-yet-impressive; a buzzing, blooming haven for plants and animals, a proud farmer showing off his panels. Ideally some alpacas would be involved at some point.

This is the climate campaigner’s dream of how clean energy works, but as the Sussex countryside flashes past and our dot on the satnav inches closer, I can’t help wondering if I might find the Daily Mail nightmare instead.

Will we arrive to some barren solar hellscape, with rows of useless panels marching across the landscape; dazzling aircraft pilots and somehow causing cancer? 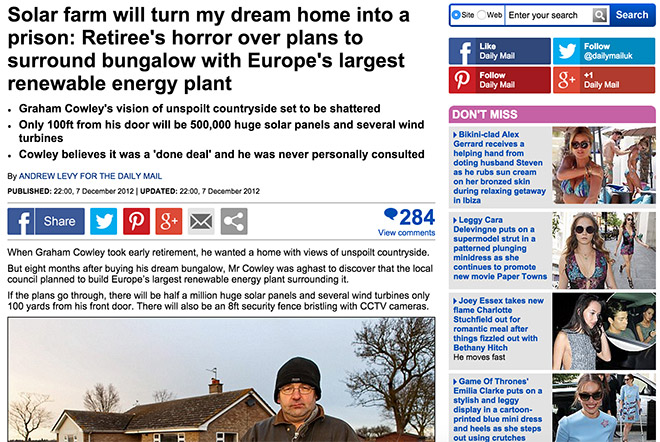 Maybe it’s my daydreaming; maybe it’s the high hedgerows screening the panels from the road, but we manage to drive past Five Oaks twice before we finally find the gate. Whatever’s behind that hedge, it’s not what you’d call conspicuous. So far so good.

We pull off the road and meet the welcoming committee… 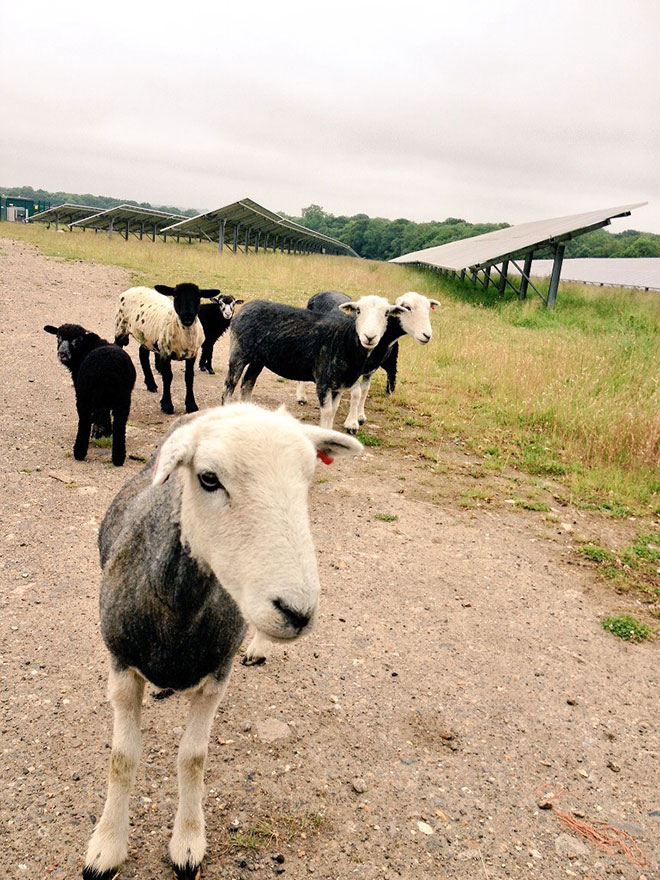 Farmer Neal arrives on an enormous yellow tractor to let us in. Neal signed the contract on Five Oaks back in 2011 (making it ancient by UK solar farm standards), and he loves it so much he just put in a planning application for another one. 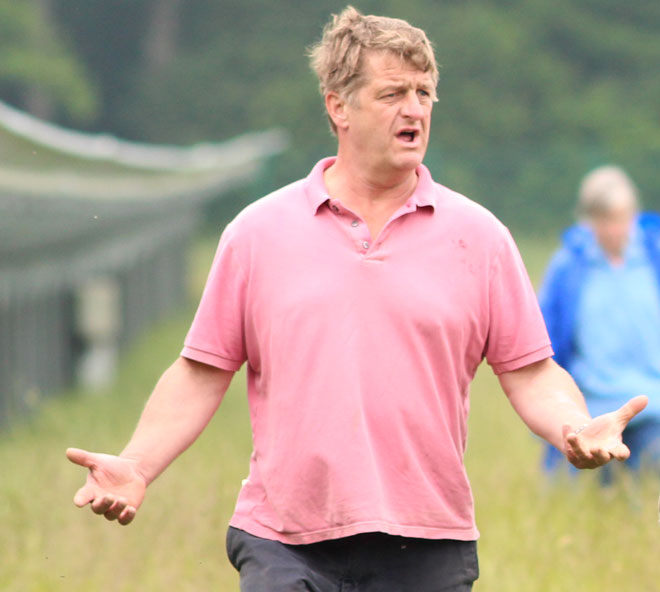 The REPOWERBalcombe team have just arrived, and they’re here on business. They’re hoping to build a similar-sized solar farm near their village, and they’ve invited a few curious locals along to see what it’ll be like. One couple lives right by the field where Repower Balcombe want to put the panels, and they seem pretty keen on the idea. 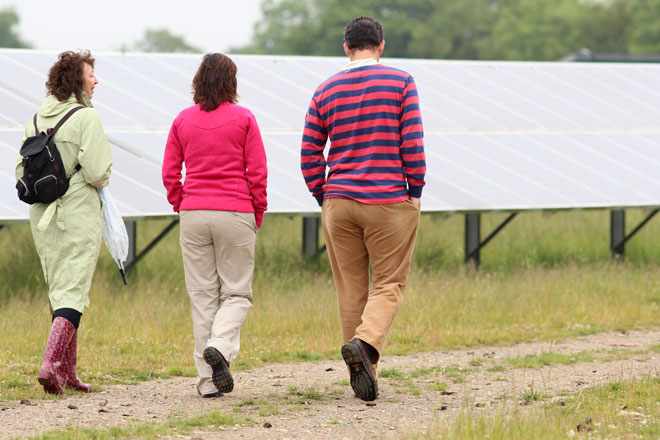 Balcombe’s story is amazing. Back in 2013, a company called Cuadrilla came to drill for oil nearby, and the resulting furore divided the normally cordial village. Now they’re uniting to build something better – enough community owned solar to match the electricity needs of all 800 homes in the parish.

If they manage to build a solar farm on this scale, it’ll easily generate enough to hit that original target, with plenty left over for nearby West Hoathly.

RPB tech director Tom is in his element, holding forth to the group about the possibilities of a solar powered future and grilling Neal about inverters and wiring. This is a man who’s found his calling, and it’s a joy to watch 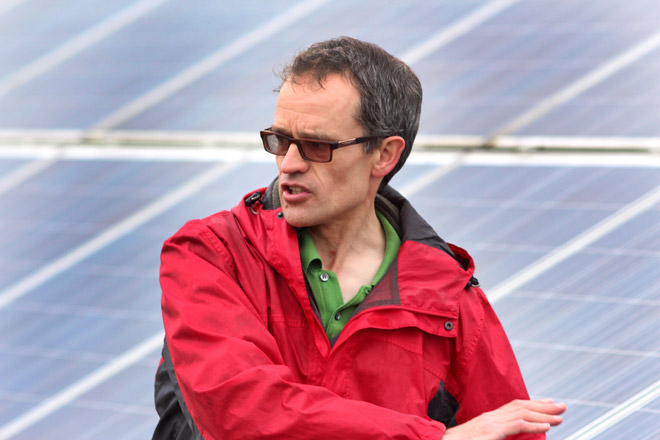 The edges of the field are a glorious tangle of foliage and young trees, but even around the panels the thick grass grows shin-high, scattered with thistles, buttercups and clover. Bees and ladybirds buzz around. Birds sing in the trees. Somewhere out of sight, a cricket joins in. I remember I’m standing in the middle of a power plant, and break out into a big grin.

I remember I’m standing in the middle of a power plant, and break out into a big grin. 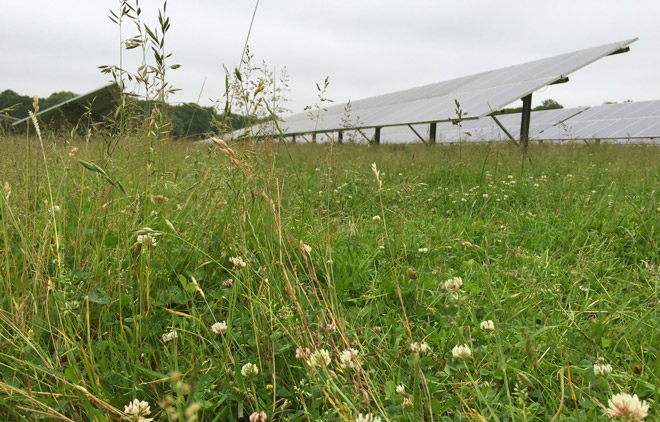 It’s drizzly and overcast today, but in full sunshine these panels will feed a steady five megawatt stream of power into the grid (on a day like this they’ll be kicking out about one megawatt). Solar tech has come a long way since 2011 though: with modern panels, Repower Balcombe will be able to get the same amount of power from three acres less land.

Cancer-free zone OR IS IT???

Another big breakthrough is in inverters – the gizmos that convert direct current from the panels into the alternating current the grid needs. Neal’s inverters are housed in sheds down the side of the field, and they can get noisy when the panels are working at full tilt. These days, they mount individual inverters on the backs of the panels themselves, and they’re practically silent.

Sheep and solar panels are a perfect match: Neal’s 40 ewes like to shelter under the panels when it rains (you can see the flattened patches of grass where they’ve slept), and their grazing keeps the plants from getting too wild. 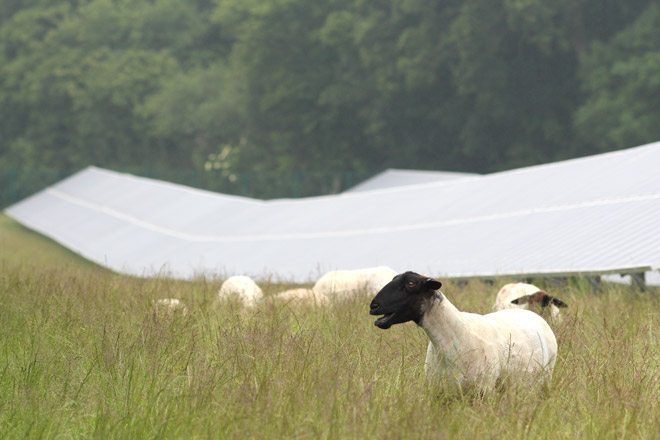 If you love solar and you know it make a ridiculous noise..

There’s a shady corner at the bottom of the field, where the farm gives way to ancient woodland. Solar panels wouldn’t work well here, so Neal dug a new pond instead. It’s beautiful. 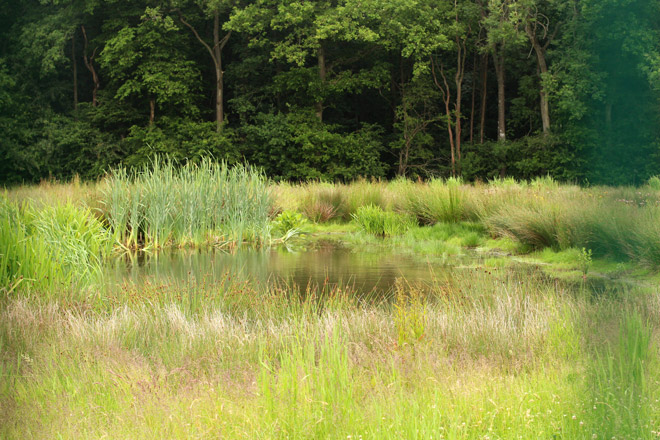 We disturb a couple of buzzards hunting mice and voles in the long grass around the panels. Sorry buzzards!

After one leisurely lap of the field, it’s time for a group photo, then home to more civilised Sunday pursuits. From my vantage point, I can see lambs playing between the panels, the pair of buzzards circling the trees at the bottom of the field, and the curvy contours of the South Downs on the horizon. I pause for a second, allow myself a little sigh of relief, and click the shutter. 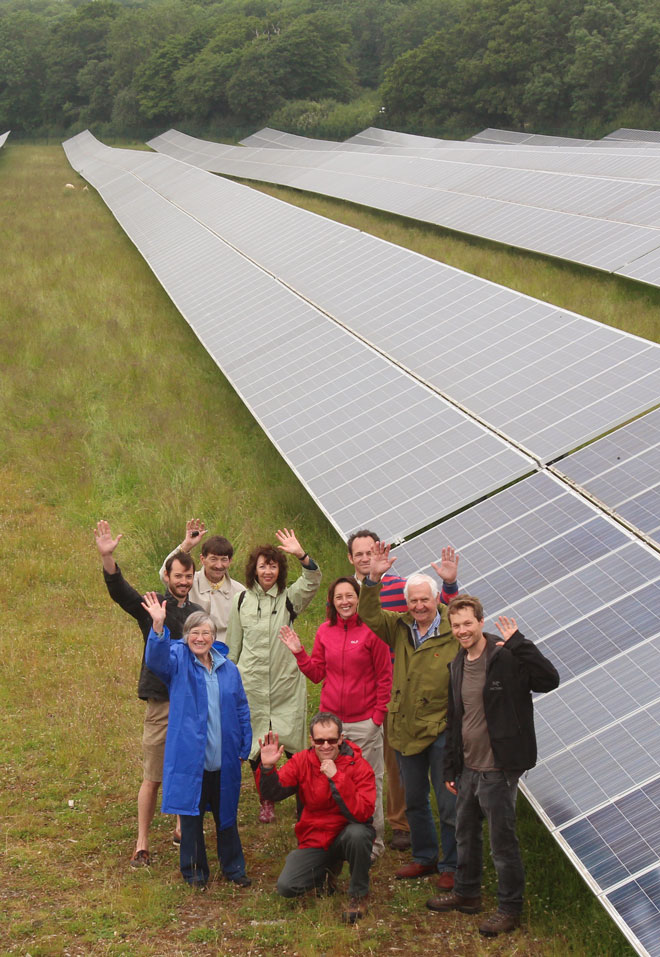