August 17, 2016
Daniel Jones
How the people of Vancouver are making their bit of Canada greener

We’re all used to the stories of Canada’s new Prime Minister Justin Trudeau being awesome on the environment. But it wasn’t always like this.

Before Trudeau came to power, the Canadian government had a pretty awful reputation on climate change. Actions like decimating the budgets of sustainability research and silencing scientists who speak out meant that green wasn’t the colour best associated with the Harper government.

But one shining light was Vancouver, who’s mayor presides over one of the cleanest, healthiest and most liveable cities in the world.

So how did they do it?

For Vancouver the answer was simple; you take the initiative yourself, and wait for the rest of the country to catch up

In 2008, Gregor Robertson campaigned for election as Vancouver's mayor with a promise to make the city the greenest in the world. He was elected in a landslide - 55 percent of the vote - and speedily began concocting a plan to achieve that promise.

In 2011, his Greenest City 2020 Action Plan was published. It's not short on detail - running to 82 pages, and covering every aspect of city life from food and water to transportation and buildings. It has ten goal areas, each with several specific targets for 2020. Under green transportation, for example, the city wants to make more than 50 percent of trips conducted by foot, bicycle or public transit and reduce the average distance driven per resident by 20 percent from 2007 levels. 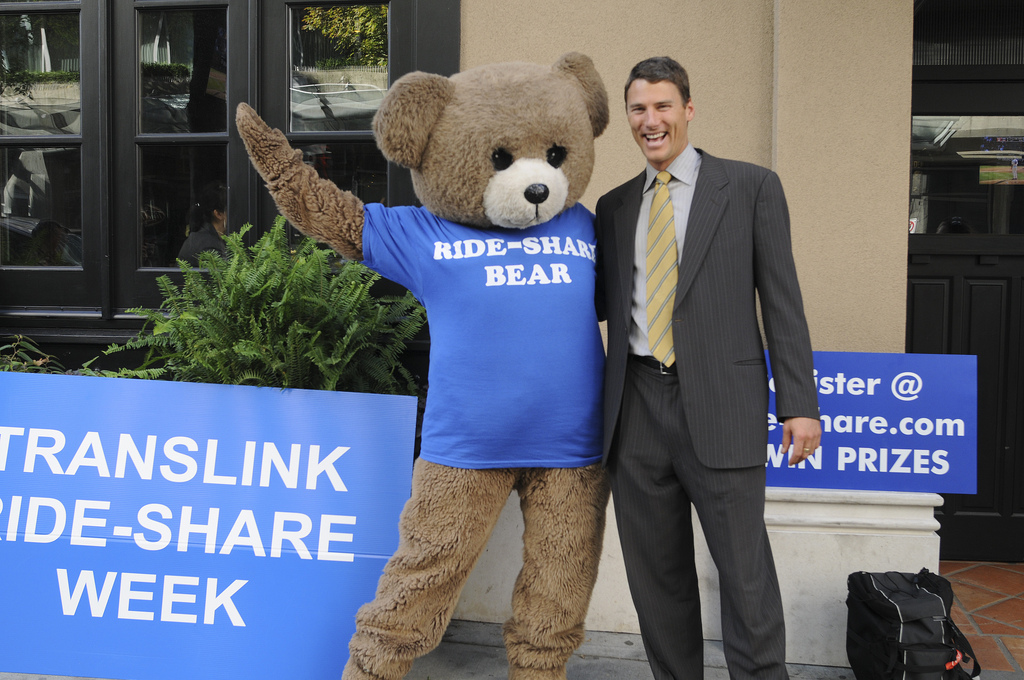 Why not ride-share with a bear (and mayor Robertson, of course)? photo: The Buzzer, Creative Commons

Many of the pledges are openly ambitious, willfully audacious even. The city wants to reduce its carbon emissions by a third over 2007 levels, and halve the amount of waste going into landfill. It wants to ensure everyone lives within five minutes of a park or other green space, plant 150,000 trees and ensure that all new buildings constructed from 2020 onward are completely carbon neutral.

To achieve those pledges, Robertson and his team have kicked off a series of 120 projects and initiatives across the city, each aimed at multiple parts of the plan. For example, plumbers are being trained to install higher-efficiency fixtures and appliances and taught how to calculate potential water and financial savings to educate their client, while a 'green landlords' pilot scheme is offering building owners discounted energy savings upgrades for their property.

What's more, the plan appears to be working. The city issues annual report cards that identify not just successes and progress towards its green targets but also challenges that need to be addressed. The most recent to be published, which covers 2013-2014, shows a 20 percent increase in the number of green jobs in the city and a six percent drop in community carbon emissions. Most impressively, they’ve achieved a 100 percent drop in the number of days that fail to meet the World Health Organisation's most stringent air quality guidelines for ozone, particulate matter, nitrogen dioxide and sulphur dioxide.

There's still some way to go. The goals on access to nature and green buildings, in particular, are showing slow progress - with swings of just 0.1 percent and three percent respectively. But the city's ambition are stronger than ever, with a recent pledge to go 100% renewable underlining just how seriously this transformation is being taken.

And the indices appear to be moving in the right direction, so as long as Robertson (who was reelected in 2011 and 2014 with only a slightly decreased majority) can stay the course then there's no reason why Vancouver can't achieve its goal of becoming the greenest city in the world. And with Trudeau now at the helm nationally it looks like Canada as a whole could be sailing towards a greener future.