September 18, 2017
Esther Griffin
Fracking, nuclear and wind: which would you rather have in your backyard?

If you answered wind, then ding ding ding: the majority of the UK public agree with you!

65% in fact. We commissioned a poll with YouGov and found that a cool 65% of people would be happy to live within five miles of a wind farm.

For nuclear and fracking, it’s another story. 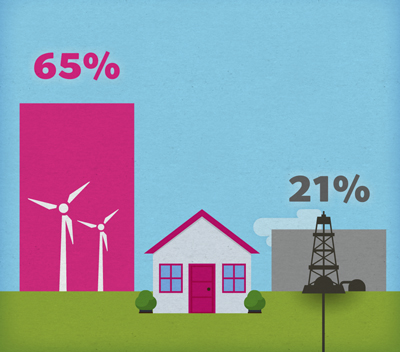 Conservative and Labour voters actually agree on this - 76% of Labour voters would live near a wind farm, but so would 57% of Conservatives. And support is evenly spread across UK regions too. So much for middle-England Tory voters blanching at the sight of a turbine.

When a wind turbine is owned by the community, it’s even more popular. Only 17% of people would be unhappy living near a community wind farm - that’s 7% less than a commercial one.

None of this is super shocking. So why ask?

Every year the government asks the public whether they’d like to live near a big renewable power plant. And people say ‘yeah, sure’. But, weirdly, they don’t ask whether people would like to live near their favourite new energy technologies - nuclear and fracking.

You could say our research is helpfully plugging a gap in their knowledge.

It might come in handy, because it’s yet more evidence that how people feel about different technologies couldn’t be further from government policy.

They’ve all but banned onshore wind power in England because they say ‘people don’t want it in their backyard’. At the same time they’ve been forcing fracking on communities that have explicitly rejected it - and pouring hundreds of millions into small modular nuclear reactors.

We’re gathering a movement of people who are standing up for onshore wind. Thousands of us have already demanded the government give wind the financial backing it deserves and called on the government for fair treatment in the planning system.

But there’s plenty more to do - the government is still kicking onshore wind down while giving fracking a free pass. Will you join us? Sign up to throw your weight behind onshore wind power.

If you want to read the full polling results, you can download them here.