May 26, 2016
Holly Stower
Does unplugging a charger really save energy?

It's a classic bit of energy saving advice; a staple of those '10 easy ways to go green' boxes that accompany climate change articles. But does unplugging your phone charger really make a difference?

Dr David Schmidt, who runs a popular renewable energy course at the University of Minnesota, decided to find out for himself.

Schmidt ran an in-home experiment with a Kilo-Watt meter and tested items such as laptops and phone chargers. 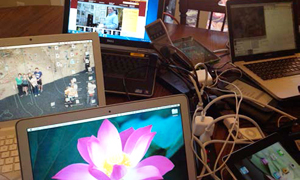 Schmidt began the experiment by plugging only the power cords (chargers) for four laptops, two mobile phones, two iPads, a Nook, a Nexus, and an iPod all onto the same power strip. Even with all of these chargers plugged in, the meter read 0 Watts.

Next, Schmidt connected all the devices to their chargers, made sure all devices were on, fully awake, and charging. At this time in the experiment the Kilo-Watt meter read above 195 Watts.

Continuing the experiment, Schmidt then put all the devices into their sleep mode, but maintained that they were all still charging. This reading level was roughly 150 Watts.

Lastly, Schmidt took a reading of the devices when they were all connected to their chargers, in sleep mode, and fully charged. This reading was eight Watts. 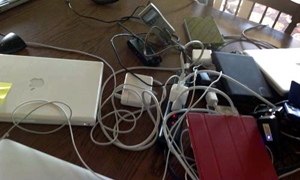 It’s worth noting that Schmidt's experiment only covered chargers for devices that you'd regularly unhook and use on the move.

Things that tend to stay put, like microwaves, wifi boxes and games consoles tend to use a bit more power, although new efficiency laws have brought this right down in recent years. So unless you have lots of older devices, plugged in 24/7, this shouldn't account for a big slice of your energy usage.

If you're keen to see how your standby power stacks up, the plug in energy monitors used by Dr Schmidt are pretty easy to come by. Better still, you might be able to borrow one from your local library or environmental group – well worth a try.

This post is adapted from a piece by Kristi Loobeek, first published on the Clean Energy Resources Teams website. It's reposted here under a Creative Commons license (CC BY-NC-SA 3.0).