The disused paint factory nestled in between Dalston Junction and Kingsland Road tells a typical east London story. After years of post-industrial neglect, it's been brought back to life by a creative community who saw the potential in its cavernous interior.

Walk through the doors and you’ll find a place that ticks all the boxes for an industrial art space: crumbling concrete walls covered in production posters, wires dangling tantalisingly from the ceiling, a jumble of mismatched chairs occupied by groups of people noisily discussing theatre.

The chatter competes with periodic outbursts of shouting from a nearby audition, and the rush of water from an exposed pipe on the wall. It's a curious combination of sounds, but talking to sustainability projects manager Feimatta Conteh, you get the impression that Arcola embraces curious combinations.

The collection of smart meters assembled in the corner of the room is the first real clue that there’s a little more to this place than meets the eye. It’s Feimatta’s job to get Arcola to a point when they’re producing at least as much energy as they use. "Since 2007, creating the world's first carbon neutral theatre has been a principal aim." It's no easy task, but she’s infectiously optimistic, and seems to have had a real boost from being part of 10:10.

Arcola joined in 2009 and managed to bring their emissions down by 32% in twelve months while still in their old home in Arcola Street. During their 10:10 year they found out that their building was to be turned into plush apartments (a rather apt twist in the aforementioned east London story) and they were going to have to relocate.

The impending move made it pointless to invest in expensive technology, so they focused on changing people's energy habits instead. Actually figuring out how to monitor what they were using was the first main hurdle they faced; this, Feimatta says, "meant spending quite a while figuring out which of the electricity meters in the dank under-stair cupboard belonged to us.”

With measurement sorted out, they used a combination of signs and some gentle words to encourage people to switch lights and appliances off when they weren’t using them. For a busy theatre that consumes a lot of energy, even such small changes can have a massive impact. 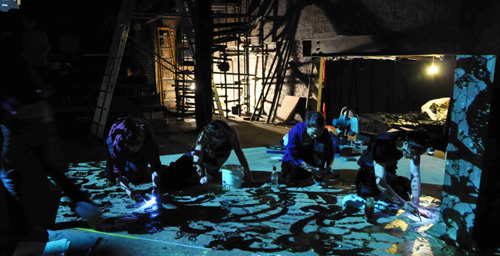 Building the set for a new production/ Photo: Andrew Steel

Now they’ve settled into their new place, Feimatta is looking to the future again. It only took them 10 weeks to turn the derelict factory into a theatre, but that’s not because they headed straight to Ikea.

Everything in the theatre seems to have been reclaimed and recycled from across London. Pointing to the ceiling, Feimatta explains, “that piece of steel, the beam across the top, had been lying in Leyla’s garden for the last couple of years.” And over there? “The roof over the bar is made from a combination of floorboards from an old set and some insulation from the Olympic park.” Upstairs we stumble across a corridor full of doors that left their corporate life in Canary Wharf behind them to fulfil their thespian ambitions.

"I thought we could open up the old chimney and put in a fire, but the fire brigade kind of said no"

While all this recycling is great news, it’s only a small part of a much bigger project. They are investigating various low-carbon ways to heat their new premises; in the summer months having no heating was less of an issue but as winter bites it’s moving higher up the list of priorities.

Feimatta thought she was on to a winner, “I thought we could open up the old chimney and put in a fire, but the fire brigade kind of said no.” Instead, they’re planning to install a wood-fueled heater which will burn scraps and offcuts from old sets or industrial sites. The fire brigade was happy to hear that they’re now planning to use the chimney as a natural ventilation system for the two theatre spaces.

Walking through the theatre’s nerve centre, full of busy looking people tapping on laptops, we come across a rudimentary science lab squeezed into a small side room. In amongst the well-worn furniture and the higgledy piggledy equipment, a couple of people are tinkering with a vice and an empty plastic bottle. Unusual? Not here. They're experimenting with ways to turn used cooking oil (sourced from a local kebab shop – it couldn't be any other way) into heating fuel.

The lab has been strategically placed on the top floor, so if an experiment does go wrong there’s no-one above them to feel the wrath of a biofuel explosion. Feimatta insists it's just a precaution, but we move on quickly all the same.

As if one experimentation zone wasn’t enough, around the corner they’re trying their hand at a more precise science. Tucked away in a small space next to the rehearsal room you’ll find an engineer or two fiddling with complicated electronics. Arcola Energy, the other branch of this eclectic company, was born in 2007 and forms a big part of Arcola’s plans for the future.

It’s no Mickey Mouse venture either – they’ve just been awarded a three-year grant to develop customisable hydrogen fuel cells – small gizmos that convert hydrogen into electricity, and give off only water and oxygen as side-products. These will play an important role in the company’s push to become carbon neutral, but Arcola Energy is also set to become a major bread-winner in the family. The idea is to sell the cells, first nationally and then hopefully internationally, then use this income to support the less profitable community arts projects. It’s an unusual collaboration but it looks like it will work.

"The lab has been strategically placed on the top floor, so if an experiment does go wrong there’s no-one above them to feel the wrath of a biofuel explosion."

This marriage of science and art is what makes Arcola really stand out from the crowd. It’s the brainchild of executive director, Ben Todd, a former engineer who saw the potential in combining the arts with science to make the case for a less polluted world.

It’s a winning recipe that mixes the rigor of science with the make-do-with-what-you-can attitude of art projects. “It’s bringing together the creative mindset and the engineering methodology,” Feimatta explains “When you’re working in large engineering firms progress is so incremental, whereas when you work in an arts organisation you need to put the show on tonight so you will do whatever you can to get it done.”

They think this unusual combination is the perfect way for them to introduce sustainability to the 40,000 people that come through their doors each year, but they know that people going to the theatre don’t want to be preached to. Theirs is a gentle approach, with messages added to the back of people's (reuseable) tickets explaining what they're up to. “If this is where people come across a hydrogen fuel cell for the first time, it’s a really interesting place for it to happen.”

These gentle nudges reach a more diverse group of people than most theatres could hope for. Arcola goes to great lengths to reach people outside the normal theatregoing constituency. Every Tuesday they have a pay-what-you-can day which gives lower-income families the chance to come to the theatre.

Feimatta is also in charge of organising Arcola's free Green Sundays events, a multifarious mix of talks, workshops, live music and film screenings that aim to involve people who aren’t dyed-in-the-wool environmentalists.They ran one for 2010's global Day of Doing and over 400 people came through their doors.

They get local children involved by organising drama workshops, and teach them about renewable energy through the Arcola Energy for Schools programme. When they talk about “giving back to the community”, they really seem to mean it.

Feimatta and her colleagues have a long way to go before they turn their carbon-neutral ambitions into reality, but they aren’t put off by the size of the task and seem determined to enjoy the ride.

Arcola is a place that’s defined by contrasts. It’s a disused paint factory soon to be adorned with hydrogen fuel cells, it’s a collision point for scientists and artists and it produces sophisticated technology then teaches children all about it. Maybe this is what a greener future will look like.